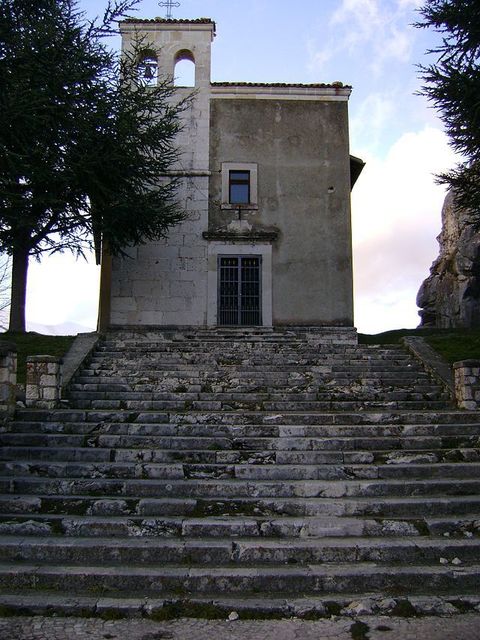 
The church is located on a high ridge, where the original nucleus of the city called Peschio once stood. It is not possible to establish a precise date for the building but it is certain that many different reconstructions followed on from the first building during the Romanesque period.

The facade features horizontal moulded stone, a third of which consists of the bell tower, which was restored after damage suffered during the Second World War. The stone bell tower ends at the top with a mullioned window with rounded arches. An inscription written horizontally above the doorway in stone states that the church belonged to the Order of Antoniani until 1777.

Inside, the altar features a 17th-century painting depicting St. Anthony and scenes from the life of the saint.

The feast of Saint Anthony

On January 17, in the village there is a festival dedicated to St. Anthony Abbot. Previously great fires were lit made with wood donated by the citizens. Today instead the wood is donated by the City. The surplus wood was sold in a public auction and the proceeds were used to organise popular games. At the same auction the so-called "de perchellucce Santantonie" was also sold - a pig raised in turn by the villagers. Today the festival is characterised by the impressive launch of thirteen balloons, one for each month of the year plus a further one - the most important - in honour of the saint.